The most massive Gothic edifice from Vienna to Constantinople is at your feet!

"Today's Black Church stands on the site of an earlier 13th-century Romanesque church destroyed in the the great Tatar invasion from 1241.

The actual construction began in 1383, when Brasov was in a period of strong cultural and economic development, being the most important commercial and industrial city on the border of Transylvania and Wallachia.

The Turkish invasion of 1421 interrupted the church building work, and the town had to concentrate on fortifications, but they were later continued according to a much simplified plan.

Due to a major earthquake in 1471, the southern tower was not built to its intended height (the northern one was not built at all).

The year 1477 can be considered as the year of completion of the church construction, in 1499 a new organ is mentioned, and later work was carried out on the tower adding a clock and bells in 1514.

The church, originally Roman Catholic, was named after St. Mary (Marienkirche), a fact that is still proven today by the fresco of Mary in the hall of the south gate."

If you have a chance to go in (it's closed today due to a private event) you really must admire the "orga Buchholz, built between 1836 and 1839 by the Berlin organ builder Carl August Buchholz.

It has four manuals, a pedalboard, 76 registers of which 63 are sound registers and 3,993 tubes.

Thus, at the time of its construction, it was one of the largest and most important organs in Europe.

The organ was preserved in its original condition because the original pipes were not lost or replaced, and the small changes made over time were later reversed. Tuning and wind pressure have been restored to their original condition."

One of the sad legends of the church is that of the little apprentice; there are many versions of this, but apparently the best documented is that of a skilled apprentice who, through his skill, earned the hatred of one of the craftsmen. The latter pushed him off the scaffolding during work on the church roof and the young man fell into the void.

In his honour the other craftsmen have erected a small monument on one of the buttresses, which looks down from above you: 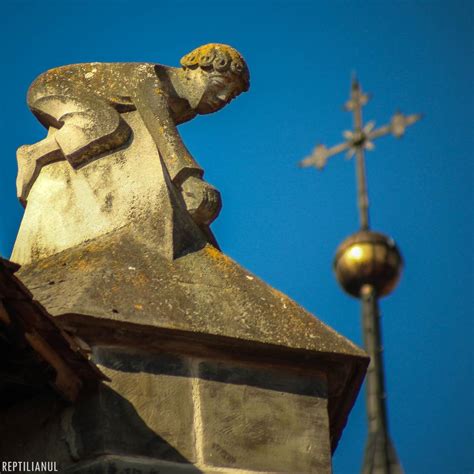 Church records: the highest tower of a Gothic building (65 m), the largest bell in Romania (6300 kg), the most visited religious site in the country.

Where do we go from here?