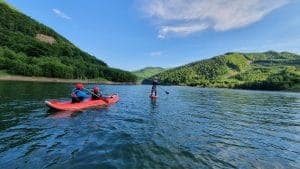 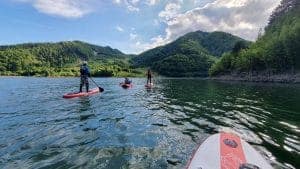 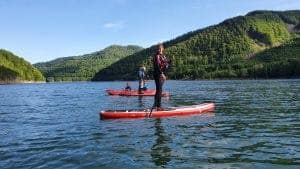 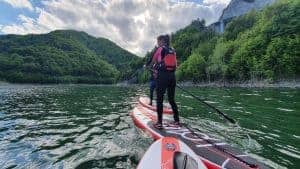 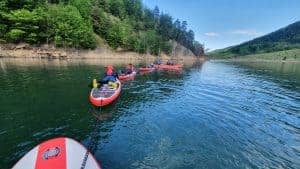 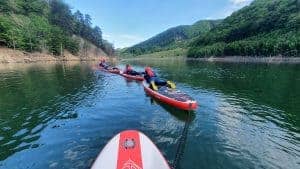 About SUP on Siriu Lake, Buzău (Stand Up Paddling)

SUP on Lake Siriu - a joy for mind and body!

In addition to the classic rides on the waves of Buzau in rafting boats or kayaks we invite you to complete the experience (or the weekend) with a relaxed tempo ride on an inflatable surfboard.

What is SUP, or Stand Up Paddling?

Well, besides a great core strength workout, SUP means 2 hours of freedom. Silence. Inner dialogue or perhaps a chat with fellow adventurers. Find the full history of this wonderful sport in the FAQ section but if you don't have the patience here's how it started, in a nutshell (taken from supconnect.com): "Stand Up Paddle boarding (SUP), the act of propelling oneself on a floating platform using a paddle or stick originated thousands of years ago and on many continents, but its current form and popularity originated in Hawaii in the 1900s . Ancient forms of SUP have been found as early as 1,000 BC in Peru, Israel, Italy, China and beyond. Unlike those modern forms of SUP, where a surfboard-like raft is used, it has a much clearer heritage dating back to the 1900s and being linked to a few characters such as Duke Kahanamoku and Dave Kalama. The sport has gained exponential popularity and California has served as a catalyst for its worldwide adoption. In 2005 SUP, which until then had been almost entirely a surfing discipline, began to diversify into competitions, tours, river rafting, yoga and fishing. Its surfing heritage, along with its various disciplines, have made the sport attractive and accessible to everyone around the world, paving the way for its global growth and enthusiastic adoption."

Are you ready to give it a try?

Or enjoy the water and sun, if you're already past your first SUP experiences? Perfect, let's see what there is to do: 💦 If you also come rafting you equip yourself for SUP at Arca Rafing Camp, 2,5 hours from Bucharest, 1,5 hours from Brasov. Your car stays in the guesthouse parking lot, safe and secure 💦 The walk to the water takes 30 minutes. We can meet you there, if you come with your car 💦 You'll learn everything you need to know before going out on the water 💦 The route and length of the tour depends on your experience and motor skills 💦 You will be accompanied by a specially trained guide 💦 The tour ends at Arca Rafting Camp with a hot shower, a clean changing room and possibly a cold drink. We've got lots of ideas for your shift, you know! It can be a leisurely stroll along the banks. Or a race against the clock. Or an exploratory lap or a combination of flowing water with the calm glow of the lake. Or a full moon, SUP and barbecue grill. Or yoga. Or... We'll plan it together before we get out on the water! Come SUP on Lake Siriu! You'll love it with us too: 🏄🏽 RAFTING ON BUZĂU: https://www.outdoor-events.ro/produs/rafting-buzau/  🏄🏽 CANYONING PORUMBACU: https://www.outdoor-events.ro/produs/canyoning-romania/ 🏄🏽 electricMTB: https://outdoor-events.ro/produs/emtb/

Do you want to rent just the equipment, without a guide?

It costs 120 lei/equipment (board, paddles, floating vest on request)/full day. The equipment is picked up/purchased at Arca Rafting Camp and requires a guarantee with an identity document.   You can also find us with photos and videos on facebook
Activity Level

What you didn't include

For camping under the moonlight and a barbecue at dusk we invite you right to our home at Arca Rafting Camp!

The campsite and terrace are in full development and camping is free for now, with free access to showers, toilets and barbecue.

The price is 180 lei/double room and includes breakfast for two people.

The guesthouse which is a partner of our rafting base offers adjacent services of sauna, massage and the best restaurant in the area.

You have a rafting base, what advantages do I get from you over others?

Don't compare us to others. Compare us to the standard of comfort you want!
Especially since it doesn't cost you anything extra, on the contrary!
It's not normal to dress in neoprene by the river, nor to go home sweaty and smelling of rubber.
You change in civilized locker rooms, separated by gender. You have hot showers at the end of your shift.
Park your car safely. You can store valuables at reception (papers, money, etc).
You'll be hungry after your shift! The restaurant awaits you with a la carte international menus.
You can stay the night before or after to enjoy the whole weekend. The area really is worth it! We can suggest trails and activities or we can walk them together.
The Swiss guesthouse that hosts the rafting base is part of a large social programme dedicated to homeless children in the area. The money spent in the hostel goes where it is really needed!

Do I have to know how to swim to do River SUP?

Yes.
If you don't know how to swim but want to come, come rafting. It's much more suitable

Do I have to be sporty or in great shape?

It is not mandatory.
You must weigh less than 100 kg (this is the maximum the SUP boards will accept).

Is it dangerous to do RSUP?

It's an adventure sport where you may swim in the current, get scratched, hit rocks or drink water.

What do they do with the glasses? Car keys? Phone?

Leave all valuables in your personal car. If glasses with glass lenses are dangerous on the water, it is preferable to leave them in the car as well. Ask us for details on the spot.

Where do I change my clothes and how do I get them back after my SUP tour on Buzău?

You will change in our rafting base in the Valea Lupului guesthouse.
Benefit from hot showers and changing rooms, guarded parking, restaurant and rooms if you need them. The tour ends in the immediate vicinity of the guesthouse. Your cars remain in the hostel car park under security.

Have you had any accidents on the water so far?

Not since 2005 when we've been taking groups out on the water.
Your security is our number one priority.
We take all the necessary precautions on every tour and in turn we continuously prepare for any incident.

How did Stand Up Paddling come about?

It is believed to have originated in Peru, South America.

More than 2000 years ago, the locals used to assemble reeds into canoes or rafts, which they manoeuvred with a paddle, sometimes standing up. They called them "Caballito de Totora" and would take them out across the surf, out into the Pacific! On the way back they used the waves to increase their speed and it is believed that the most skilled did it standing up!

After 1940 professional surfers Dave Kalama and Laird Hamilton of Maui, Hawaii birthed the recreational SUP using long paddles to move their longboards into the surf.

The early 2000s was a boom for SUP, today coastal resorts abound with rental centres and stand up boarding schools.

From here to the "assault" on rivers was just a step, today it is fashionable to "surf" on the natural waves of rivers that allow this.

And from 2020 we invite you to try with us on the Buzău River!